How to overwrite segments in TM during TMX import

In my previous blog post I wrote about how to connect TMX file to your SDL Studio project.

Here I would like to draw to your attention to one small thing. Namely if you had worked on similar project before and have your own translation memory when the client sends an update, then you might want to overwrite your segments with those of your client. For this purpose you might want to tick the box Overwrite existing translation units. The client can make shanges to the TM either during quality assurance stage or at any moment of time, therefore he/she is supposed to have the latest version of the TM.

After Import is complete press Finish.

Eventually your TM to use in the project will show up in the initial window. Press OK 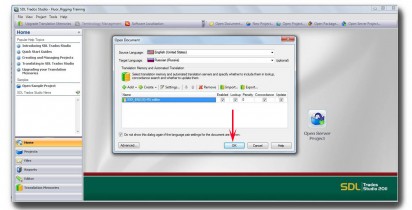 In this blog post we talked how to overwrite segments in the exisiting TM with those from the client’s TM, that will let you the latest version of the TM.

How to convert pdf files for translation in CAT tools
How to connect TMX file to your Studio project
How to make up a translation memory using translated documents
Like what you've read?

Subscribe to receive my tips on how to work with translators software for better performance.

Andrey is an English-Russian technical translator deeply fond of finding new information, solving translation problems and sharing his knowledge of the software he uses.